Combined emissions of six common pollutants dropped by 74 percent from 1970 through 2018, even as energy use and population increased, according to the report. 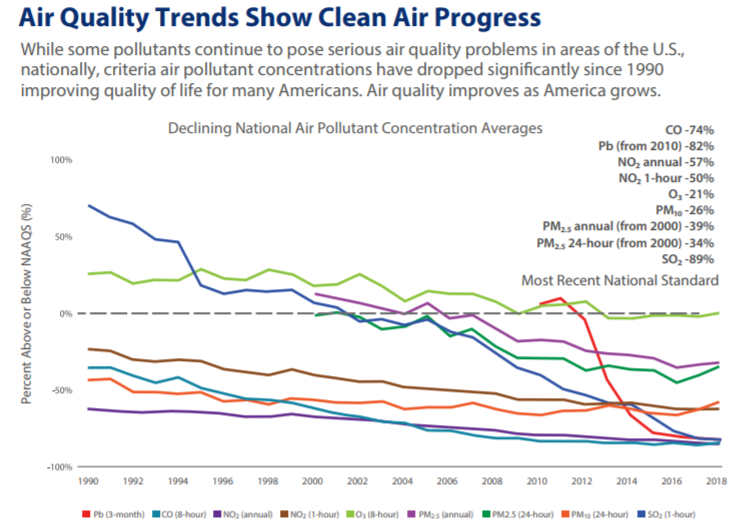 Perhaps even more impressive is that since 1970, when the Clean Air Act was passed, these emissions have declined while the U.S. economy grew by 275 percent and the American population, energy consumption and vehicle miles traveled all increased. 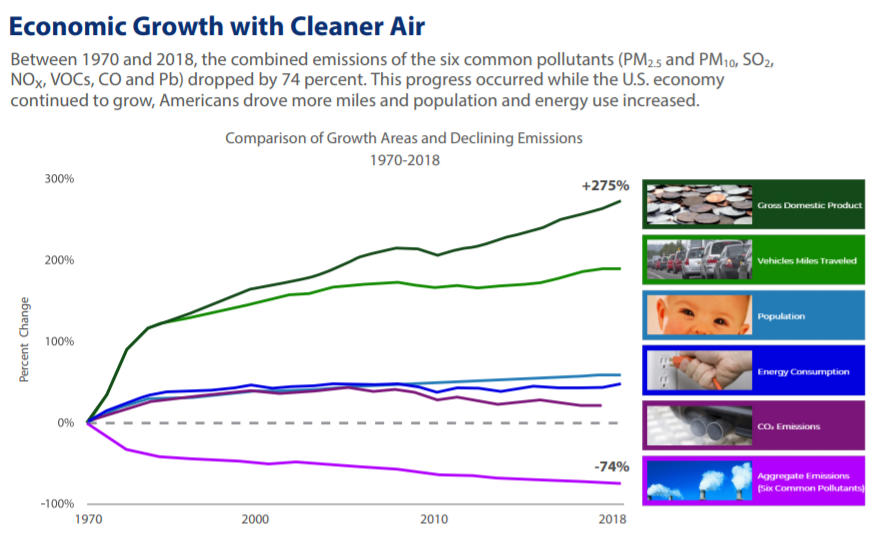 This incredible feat was accomplished in part through American innovation, which helped to make manufacturing and energy production more energy-efficient, as well as shale production, which is fueling a transition towards cleaner-burner natural gas.

Those details weren’t included in the EPA’s report, which focuses more on the impact of the 1970 Clean Air Act. Even so, the agency indirectly admits the important role fracking and shale gas have played in continuing to improve air quality. In a press release, EPA Administrator Andrew Wheeler praised the United States for being a “global leader” in improving air quality and credited private sector innovation with making that possible:

“One of America’s great but untold environmental success stories is that we have made – and continue to make – great improvements in our air quality, thanks largely to state and federal implementation of the Clean Air Act and innovation in the private sector… The U.S. is a global leader in clean air progress, and we’ve proven that we can protect the environment while growing our economy.”

Data from the report show that the air quality improvements that began with the shale revolution in 2008 are continuing. Between 2016 and 2018, emissions of six key air pollutants continued to decrease, while emissions of sulfur dioxide (SO2), nitrogen oxide (NOx) and fine particulate matter (PM2.5) — widely viewed as the most harmful air pollutants — have declined a combined 64 percent since 1990.

These reductions can be attributed in part to the increased use of natural gas, which emits virtually no SO2 and far less NOx than other traditional fuels. This in turn leads to lower levels of particulate matter, since SO2 and NOx emissions contribute to PM2.5 formation.

The report admits that innovation had something to do with the decline, but doesn’t mention the role played by fracking and shale development:

“In addition, from 1990 to 2014 emissions of air toxics declined by 68 percent, largely driven by federal and state implementation of stationary and mobile source regulations, and technological advancements from American innovators. 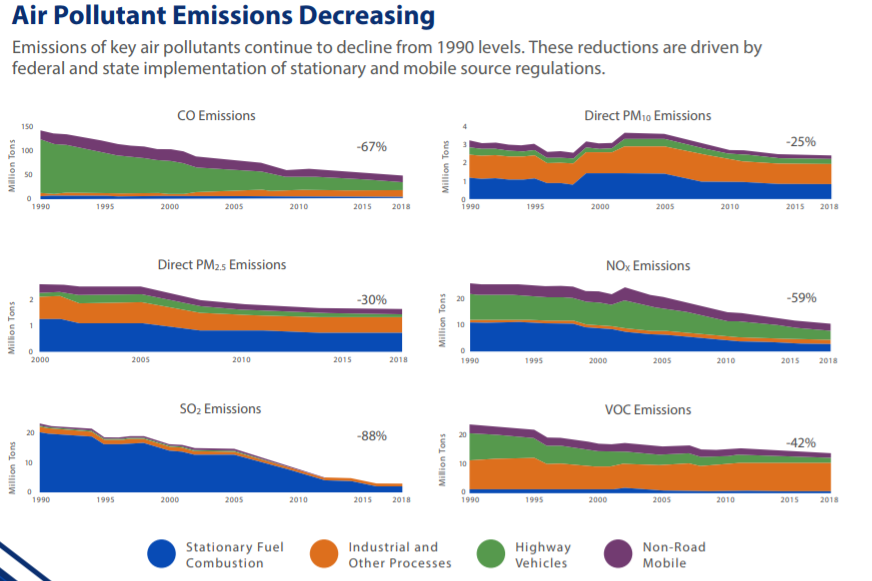 According to the report, SO2 emissions have declined 88 percent since 1990. Since the largest source of atmospheric SO2 is fossil fuel combustion by power plants and other industrial users, this is a sign that cleaner fuels and better technology are having noticeable effects on the environment. Cleaner natural gas is increasingly replacing traditional fuel sources in the generation fuel mix, this summer reaching 40 percent of U.S. generation.

This is important because SO2 can combine with other pollutants in the atmosphere to form dangerous PM2.5 particulates. It also can trigger asthma attacks. As the EPA notes:

“Short-term exposures to SO2 are linked with respiratory effects including difficulty breathing and increased asthma symptoms. These effects are particularly problematic for asthmatics while breathing deeply such as when exercising or playing. Short-term exposures to SO2 have also been connected to increased emergency department visits and hospital admissions for respiratory illnesses, particularly for at-risk populations including children, older adults and those with asthma. SO2 contributes to particle formation with associated health effects.”

Since 1990, NOx emissions have fallen by 59 percent. This is a public health benefit in its own right, since lower NOx levels also reduce smog (ground level ozone) and PM 2.5 formation. The report notes the health effects of exposure to these particulates, including heart attacks and strokes:

“These effects can result in emergency department visits, hospitalizations and, in some cases, premature death. PM exposures are also linked to harmful respiratory effects, including asthma attacks.”

Cleaner air isn’t only making Americans healthier; it is also making the country more beautiful. Along with the EPA, agencies like the National Park Service monitor visibility trends across the country. They found that most national parks showed improving visibility or decreasing haze, while cities are experiencing less smog.

These air quality improvements are something to celebrate—and another sign of the positive results of shale development and fracking.