Harvard University researchers are painting a misleading picture of their recent study’s findings on mortalities and health care costs resulting from the combustion of fuel sources to provide energy.

The study, which compares particulate matter (PM 2.5) emissions impacts from various uses of coal, natural gas, oil and biomass, has generated headlines focused on natural gas without offering context to the findings – namely that if a fuel source is not being widely used, other fuel sources will have greater impacts.

Perhaps more importantly, is what’s being excluded from these discussions: Natural gas’ mortality impacts from PM 2.5 emissions decreased in all sectors and is nearly zero for electricity generation despite the widespread increased use of the fuel source. 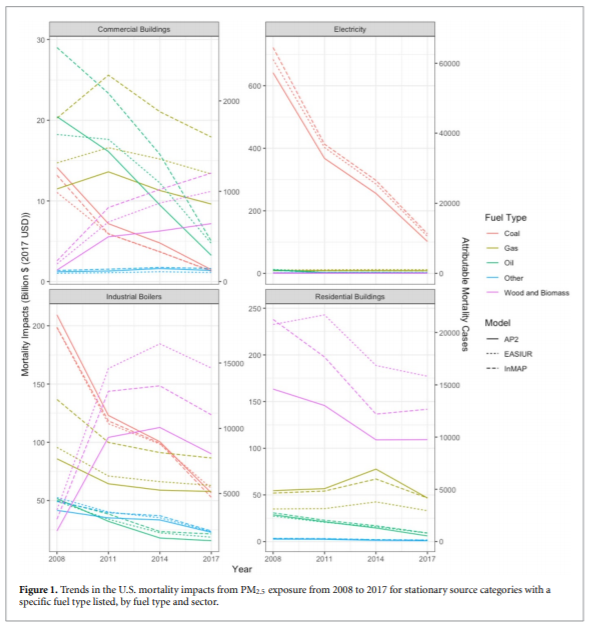 In fact, while natural gas may have a higher share of the impact burden – as the study and coverage has focused on – pollutant emissions from natural gas declined or remained consistent during the study period. 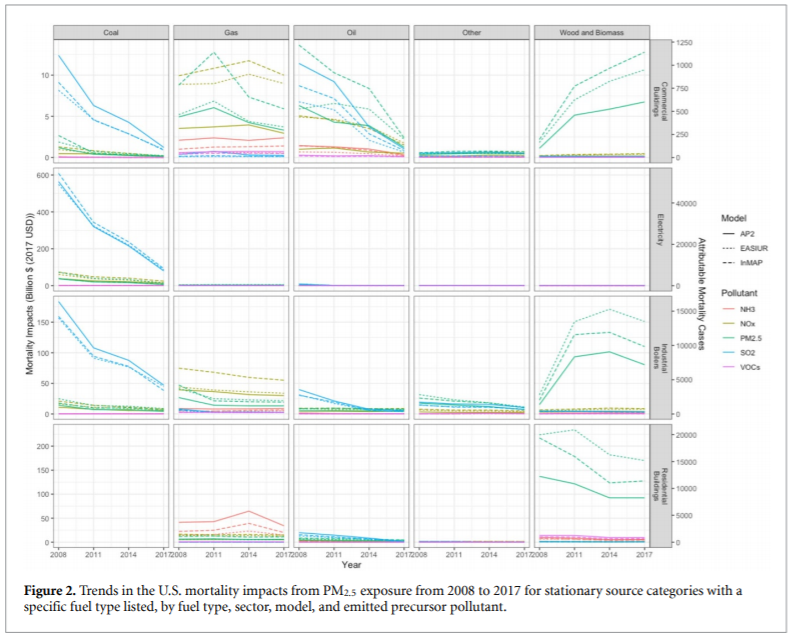 The narrative being perpetuated that this study demonstrates a need to move away from natural gas usage for consumers and electricity generation – despite the researchers’ acknowledgement that “the health impacts of biomass and wood combustion are higher than combustion of coal and gas individually” – is unsurprising given the sponsors of the research, RMI and the Login5 Foundation.

RMI (formally Rocky Mountain Institute) has been vocal in opposing the use of natural gas in homes, as well as for electricity generation, calling the continued investment in natural gas “a bridge backward.” Similarly, Login5 Foundation seeks to move away from fossil fuels in buildings, and has partnered with Harvard on research in this space.

“The increasing role of gas and biomass and wood emissions in the health burden of PM2.5 exposure indicates that swapping one air pollution-emitting fuel source for another is not a pathway to a healthy energy system.” 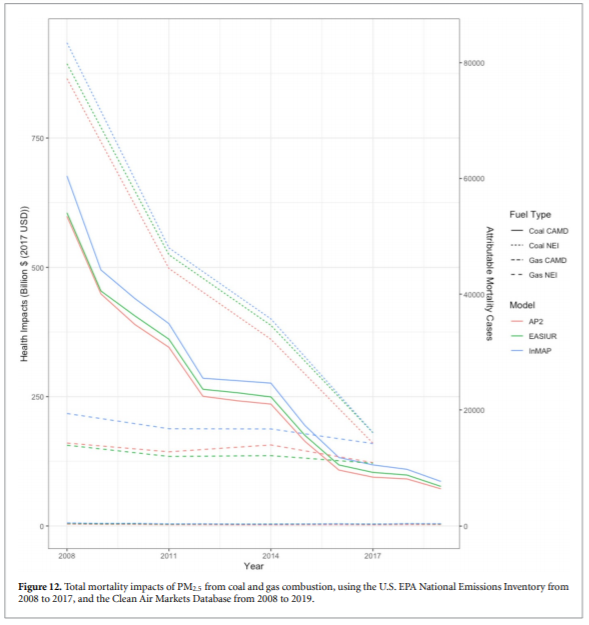 In fact, natural gas consumption increased in all sectors between 2008 and 2018, according to Energy Information Administration data, yet the study finds that PM 2.5 mortality impacts as a result of the combustion of this fuel source decreased across all sectors. 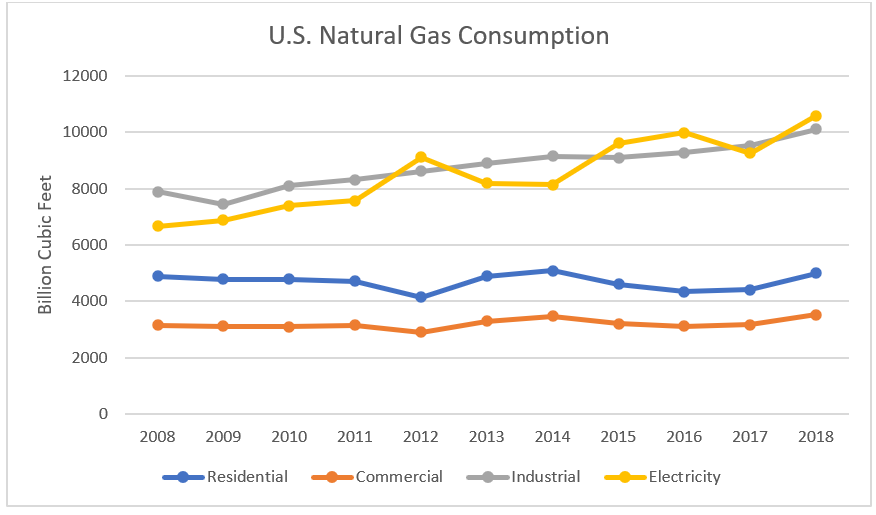 Residential natural gas consumption had only slight fluctuations over this time period, with 2.2 percent more natural gas consumed in 2018 than in 2008. As the above chart shows, depending on the model used, mortality impacts declined or remained relatively stable and far lower than wood or biomass.

Although reporting on the study has focused on comparing coal and gas, the reality is that coal has zero impacts because its use in homes has decreased to a negligible amount – EIA does not even provide data for residential coal consumption for those years.

According to the study, PM 2.5 mortality impacts were at or close to zero for natural gas over this time period, with coal accounting for all of the impacts – less each year as coal-fired power facilities have closed. For perspective, natural gas consumption by the electric power sector increased nearly 59 percent from 2008 to 2018, yet the fuel’s share of the burden of impacts was negligible.

The industrial sector increased its consumption of natural gas by 28 percent from 2007 to 2018, and as with the other sectors, PM 2.5 mortality impacts didn’t follow the same trend.

According to the study, the commercial sector is the only one where natural gas has a higher burden of impacts than all other fuel sources. Yet despite this – and an 11.5 percent increase in consumption since 2007 – PM 2.5 mortality impacts are trending downward.

U.S. air is the cleanest it’s been in decades, with key pollutants, including those analyzed in the Harvard study, falling 77 percent since 1970, according to the Environmental Protection Agency:

“Nationally, concentrations of air pollutants have dropped significantly since 1990:

During this same period, the U.S. economy continued to grow, Americans drove more miles, and population and energy use increased.” 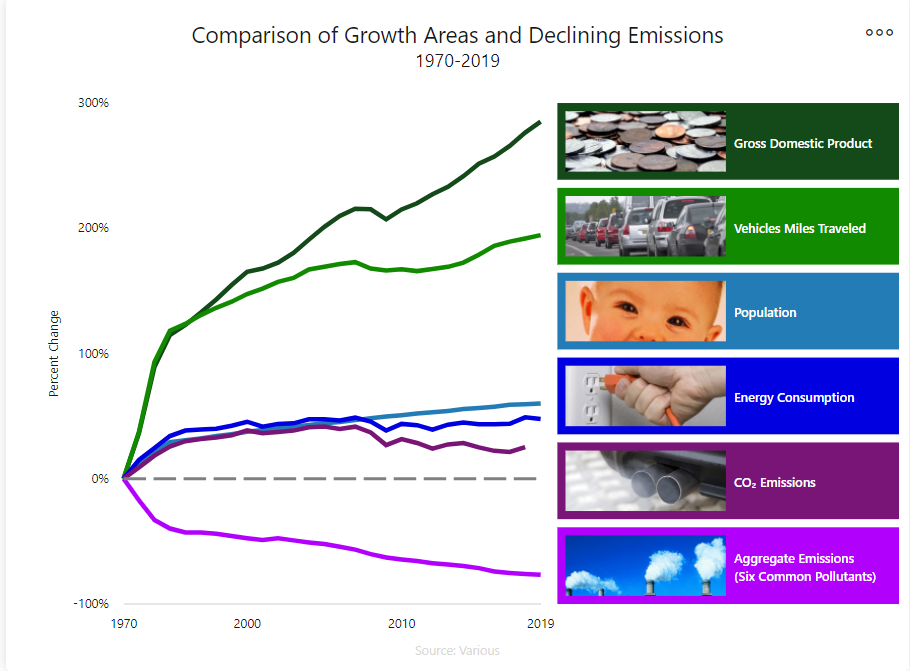 As EPA explains, the incredible progress in improving U.S. air quality has occurred despite growth in population, GDP, vehicle miles traveled and energy consumption. Not mentioned, is that it’s also taken place alongside the prolific growth of U.S. energy production made possible by the shale revolution.

Continuing this trend and decreasing the environmental impacts of U.S. energy production and consumption should be key priorities. Despite the prevailing rhetoric around this study, it actually shows those impacts already are decreasing.