Further, the EPA report includes a NASA satellite imaging time-lapse video of SO2 emissions across the country that shows the Appalachian Basin’s SO2 emissions virtually disappearing from 2005 to 2014. 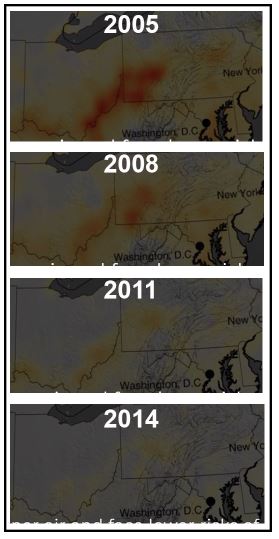 And while the EPA didn’t have data available for 2017, NASA’s satellite imaging showed this trend also continued from 2014 to 2017:

Here’s why that’s a big deal. SO2 has been described by the EPA of being of “of greatest concern” with regard to health, noting,

“Short-term exposures to SO2 can harm the human respiratory system and make breathing difficult. Children, the elderly, and those who suffer from asthma are particularly sensitive to effects of SO2.

“SO2 emissions that lead to high concentrations of SO2 in the air generally also lead to the formation of other sulfur oxides (SOx). SOx can react with other compounds in the atmosphere to form small particles. These particles contribute to particulate matter (PM) pollution: particles may penetrate deeply into sensitive parts of the lungs and cause additional health problems.”

Reductions in SO2 emissions are incredibly important for respiratory health. And these reductions are occurring, at least in part, thanks to the increased use of natural gas occurring as a result of the shale revolution taking place in the region.

As EPA describes, “The largest source of SO2 in the atmosphere is the burning of fossil fuels by power plants and other industrial facilities.” And those facilities, especially in the Appalachian Basin, are switching to natural gas. 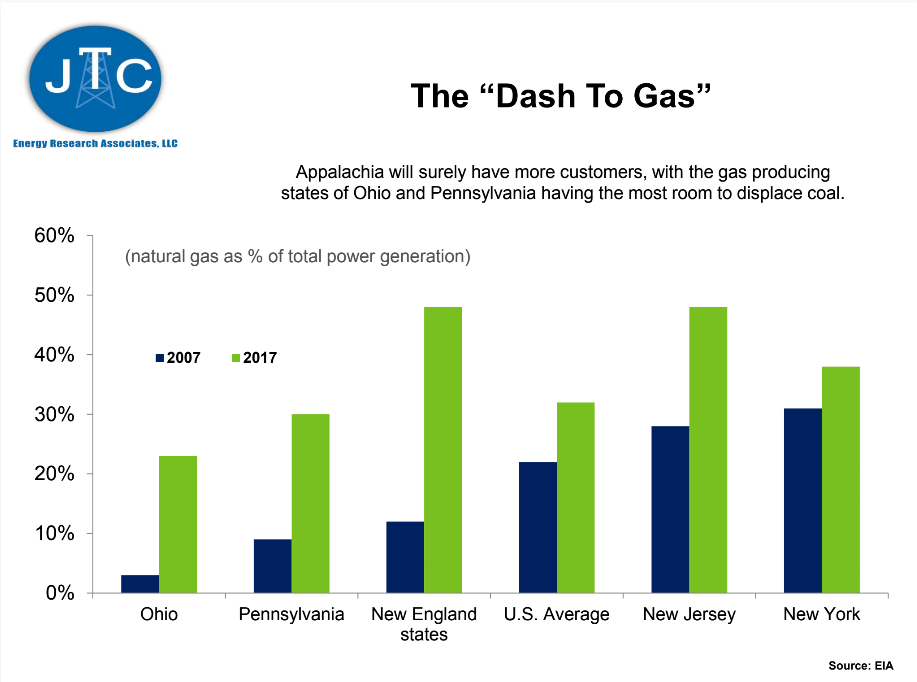 As is evident by NASA’s satellite imaging, this switch to natural gas is having tremendous air quality benefits – and not just in the Appalachian Basin. A recent Ceres report co-sponsored by the National Resources Defense Council (NRDC), found that electricity sector SO2 emissions nationally dropped 91 percent from 2005 to 2016.

Notably, the Ceres report credited this incredible drop in emissions to “energy efficiency improvements and the displacement of coal by natural gas and renewable energy resources.” That’s because when combusted, natural gas emits virtually no SO2.

And the best part – it’s not just SO2 that’s being greatly reduced in the region.

In fact, Ohio has had the greatest carbon reduction in the entire country this century, leading the Environmental Defense Fund to call the Buckeye State the “nation’s carbon-reducing powerhouse.” Ohio’s carbon emissions declined 37.7 percent from 2005 to 2015, far outpacing runner-up Indiana’s 28.6 percent reductions.

“The biggest reason for the decline, according to watchers, is the advent of shale gas drilling in Ohio. The shale drilling boom’s cheap gas has caused new natural gas power plants to come online in Ohio and nearby states that sell their power into Ohio on a shared electricity grid.” (emphasis added)

This latest EPA data further demonstrates that shale gas development can be both protective of the environment and public health, while also bringing incredible economic benefits to the Appalachian Basin. And that’s something we all should be able to get behind.