Calling out the McKenzie Media Playbook

Give credit where credit is due — University of Colorado Public Health professor Lisa McKenzie must be moonlighting as a public relations professor/professional given that she sure knows how to work the earned media front, releasing reports that achieve one scary, fear-mongering headline after the other. In fact, we’ve seen this several times over the past few years, the most recent example earlier this month as McKenzie released her latest report. Like clockwork, this report successfully made a media splash in Denver and carried out a full-court press across the country with over-exaggerated and unsubstantiated headlines about oil and gas activity.

McKenzie study rollouts are a well-oiled machine at this point – with standard procedure is as follows:

In fact, as covered by EID-Mountain States’ Heath Report released in April, many of McKenzie’s actual findings stand in contrast to the general media narrative they generate. EID examined health data from Colorado’s top oil and natural gas producing region, Weld County, and also took a deep dive into the Colorado Department of Public Health and Environment’s (CDPHE) analysis of several studies that purported to show a correlation between oil and gas activity and ill health effects. CDPHE’s findings directly refute claims that oil and gas development is a high-risk threat to public health. Instead, it found shortcomings in most of the reports, including those authored by McKenzie, and deemed many inconclusive.

From a summary of EID-Mountain State’s health report posted on EIDHealth.org:

A new report released by EID earlier this year examines public health data points and highlights analysis conducted by the CDPHE, which show positive health indicator trends and low-risk air sample readings that stand in stark contrast to claims made by activists opposed to the state’s oil and gas industry. Despite CDPHE findings, anti-fracking researchers continue to produce work in an effort to stand counter to the state’s top health regulator’s findings.

“To be clear, our industry is very supportive of research and science. Colorado’s oil and natural gas companies are working each day, using science and scientists, engineers and geologists, to find new and innovative ways to use 21st century technology to reduce emissions, decrease our footprint and make our industry cleaner and safer than anywhere in the country.

“However, we are opposed to research that seems geared toward generating sensational headlines, biased political outcomes and out-of-context media reports that only serve to unnecessarily worry Coloradans.” 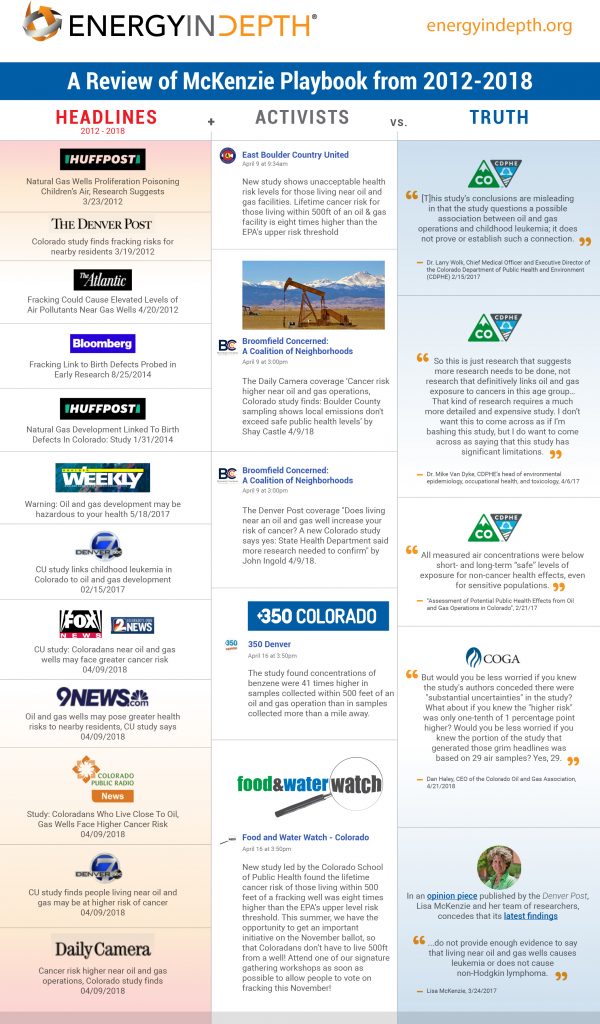 A Review of the McKenzie Playbook

EID reviewed McKenzie’s past reports roll-outs, spanning the past six years. We see a consistent trend of scary media headlines and subsequent pushback by the state’s top health regulators.

McKenzie and her team released a study which claimed to find the “lifetime cancer risk of those living within 500 feet of a well was eight times higher than the EPA’s upper level risk threshold.”

The Colorado Department of Health and Environment’s (CDPHE) Chief Medical Officer and Executive Director, Dr. Larry Wolk, issued a statement which confirmed the many flaws EID discovered in McKenzie’s most recent study.

In addition, Dan Haley, president of COGA, points out a few other “minor” details swept under the rug in most news coverage in an op-ed addressing those “worrisome” headlines:

“To her credit, however, Shay Castle, a reporter for the Camera, did point out that, ‘On average, Americans have between a 30 percent and 40 percent chance of (getting) cancer over a lifetime. This adds less than one-tenth of a percentage point to that risk, McKenzie said.’ Unfortunately, it was in the eighth paragraph under a headline trumpeting, ‘Cancer risk higher near oil and gas operations, Colorado study finds.’”

And when it comes to McKenzie and team’s use of the extreme California standards over the Environmental Protection Agency and Colorado state standards, the Colorado Springs Gazette editorial board had no problem calling them out:

“Despite the headlines it inspired, the report tries to support only a 0.083 percent increase in lifetime cancer risk associated with proximity to fracking wells. To reach that little number, McKenzie could not use cancer-risk calculations established by the federal EPA or the Colorado Department of Public Health and Environment. Instead, she borrowed standards concocted by California — a state that requires cancer warning on coffee, and alerts consumers about cancer risks associated with phones, amusement parks, parking garages, and a slate of other common activities.”

In 2017, McKenzie published a study claiming to find an association between oil and gas development and childhood cancer that was immediately disavowed by the CDPHE for a myriad of reasons, including its small sample size, failure to measure individual exposure and failure to address additional or alternate risk factors.

One of the CDPHE’s top officials, Dr. Mike Van Dyke, shared in an interview with the Colorado Independent that the study suffers from “significant limitations” and constituted “research that suggests more research needs to be done, not research that definitively links oil and gas exposure to cancers in this age group.”

Researchers from Resources for the Future, a Washington-D.C.-based environmental think tank, kept their criticism of this universally panned study short, but to the point: “There are many issues that might bias the results of the study.”

In 2014, EID pushed back on a McKenzie-led study purporting to have found “an association between those who lived within a 10-mile radius of (oil and gas development) and congenital heart defects and possibly neural tube defects.”

McKenzie and her research team ignored a host of other risk factors, including smoking during pregnancy, access to pre-natal care and genetic history. This study was so flawed that CDPHE issued a statement prior to the papers’ release warning the public not to be misled by its conclusions. Dr. Wolk said the researchers used “miniscule” statistical differences to claim some kind of connection, a connection which public health officials rejected.

“[W]e disagree with many of the specific associations … [and] a reader of the study could easily be misled to become overly concerned,” Dr. Wolk said in a January 2014 statement.

In the wake of this rebuke, one of the study’s co-authors admitted the paper’s shortcomings, telling Rocky Mountain PBS, “It’s certainly not a conclusive study, and it doesn’t demonstrate that pollutants related to shale development have caused birth defects.”

2012 – When the McKenzie saga first began

The study that kicked off a series of many other disavowed studies to follow claimed to show “air pollution caused by fracking may lead to health problems for those who live near natural gas drilling sites.” The report was so seriously flawed that the research team responsible for the paper was fired by the Colorado county that commissioned it almost a year before the study was published. Garfield County environmental health chief Jim Rada also disavowed the paper for its “significant” data limitations.

Though the study’s conclusions were based on actual air samples (a rarity among such literature), it exaggerated emissions from well development by at least 10 times, due largely to the fact that the researchers failed to take into account exhaust fumes from a major interstate highway less than a mile away.

The study’s long list of flaws also includes the fact that it included no background emissions data and also failed to note the cancer risk detected was not above the national average. The researchers’ methodology was so bad that the CDPHE reneged on its planned funding of the research. CDPHE has been a vocal critic of McKenzie’s work ever since.

Once you put the puzzle pieces of the numerous debunked McKenzie studies together – it’s clear that McKenzie and her team have an obvious agenda as researchers: to produce studies with “click bait” worthy lines in an effort to spread fear of health concerns regarding oil and gas development. As McKenzie has said herself, “What these studies cannot tell us is they cannot tell us that oil and gas caused any of these health outcomes. They’re not sufficient to make that temporal connection.”